Richard Saunders provides details of areas to address when working to avoid often fast health deterioration in these animals.

Prevention is better than cure – and this is even better advice in the rabbit than in other companion species, such as dogs and cats.

Once rabbits start to go downhill, a vicious circle develops – with deterioration starting so gradually it is difficult to notice, then suddenly accelerating to a point that may be beyond help.

Together with the close relationship between appetite, food intake and gut motility, which is partially responsible for this, rabbits – as with many “exotic” species – are excellent at hiding signs of pain, injury and disease; evolutionarily designed to look bright and well right up to the point they can no longer hide it, whereupon deterioration is swift. 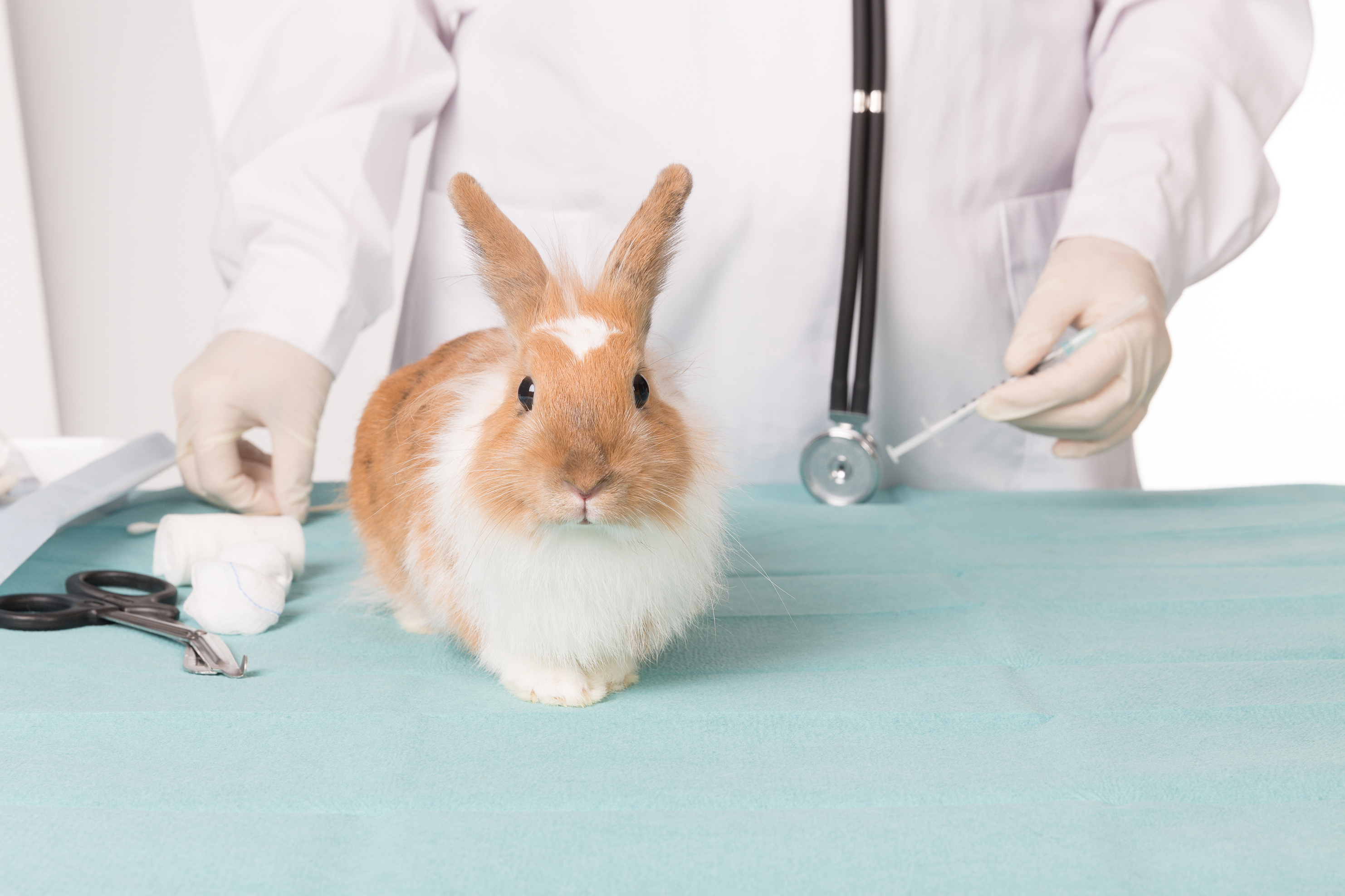 While no vaccine is ever 100% effective – and some environmental biosecurity measures are vital – this is a huge advance after the often sometimes complicated and conflicting information and vaccination protocols required using multiple products from different companies that are not licensed for use together.

Myxoma virus is spread primarily via biting arthropods – so even indoor rabbits are not safe, with cats and dogs bringing rabbit fleas in from wild rabbits, and flying biting insects able to get into homes with rabbits in. Treating in-contact pets and fly screens for windows can help.

Both strains of the RHD virus are spread by direct contact, and on fomites and other animals. The virus is relatively persistent in the environment, so can easily spread across great distances and infect new rabbits. The “success” of RHDV-2 is likely down to its lower mortality rate, moving faster than the original, which killed its hosts too quickly to spread widely (Elliott and Saunders, 2017).

We now have a much simpler vaccine schedule possible for domestic rabbits, based on a single vaccine every 12 months, so we should be able to offer clearer advice to owners. The number of rabbits vaccinated against any disease is much lower than that for cats and dogs, which is especially ironic and often tragic, given the UK has a resident population of wild rabbits acting as a reservoir of all three infections for domestic pets. The best advice is, in addition to the aforementioned biosecurity measures, to vaccinate every rabbit, every year, unless health concerns preclude it.

Current compliance levels suggest a little more than 4 out of 10 vaccinated rabbits are not protected against RHDV-2. Rabbit owners need to be made aware that effective control of RHD can only be assured if the variant strain RHDV is also covered so that the case must be made to upgrade protection for all domestic rabbits.

While it is easy to simply advise vaccination with the triple vaccine now for completely naive rabbits, the advice for previously vaccinated rabbits that are yet to receive a vaccine against RHDV-2 is slightly more involved. Further information is available from MSD Animal Health.

To read more about the new vaccine, receive updates and register for a webinar on optimising rabbit preventive health care, visit MSD’s website.

In addition to vaccination, some of the simplest preventive health care measures we can take are about ensuring our clients have reliable and accurate guidance and information on providing a suitable environment and diet for their pets. This may be provided by the practice, face to face, by vets or VNs, or via communication on practice websites or social media.

Events such as Rabbit Awareness Week (RAW) provide a focus for this, as can Easter, as rabbits are often highlighted in social media at this time – although it is vital not to promote impulse purchase of rabbits at this or any other time. “Rabbit evenings” on specific areas of health, led by a vet or VN, are often well attended.

Regular hands-on veterinary checks are also vital and may be performed prior to annual vaccination, or more frequently in older or otherwise high-risk rabbits. In the “rabbit MOTs” the author has carried out during RAW, he has almost never encountered a rabbit in perfect health, with nearly all having health issues that at least benefit from monitoring.

Keeping an eye on dental health is impossible without regular checks inside the mouth. Although examination under anaesthesia and dental imaging are required to pick up the full range of problems, a rough idea of general dental health can be obtained using an otoscope. Weight and body condition score can be assessed (although teaching the owner to do this at home is also useful); the ears’ bases can be palpated to check for ear-based masses developing from the middle ear; and abdominal palpation, thoracic and abdominal auscultation help pick up problems before clinical signs develop.

Assessment of joint mobility, presence or absence of pododermatitis and urine staining should be performed. Regular blood testing is not necessarily likely to pick up many issues in rabbits, although it is remarkable how many rabbits have low grade anaemia, indicative of some chronic disease process.

Work carried out by Meredith et al (2015) on hay‑only diets showed young, healthy rabbits had excellent dental and gastrointestinal health, but a small amount of pellet and vegetation acted as a “hay balancer” – especially in rabbits with already suboptimal dentition that may simply not be able to eat the required volume of hay.

A hay and extruded pellet diet overcomes this, but it is important to educate clients on just how little pellet rabbits need – approximately one egg cup full a day for a 2kg rabbit.

Feeding muesli presents the opportunity for selecting the more palatable and energy‑dense parts, and unbalancing the diet. Plus, if feeding muesli or pellet in excess, such an unbalanced diet results in slower gastrointestinal (GI) motility, more dental pathology, and associated problems such as obesity fly strike.

The rest of the rabbit’s husbandry should be addressed, too. Insufficient opportunity to move in three dimensions (rabbits love to stretch up and many hutches are too low to allow this) and do more than simply hop – run, jump and play – helps with weight and mobility, and makes it easier to see if a rabbit is slowing down due to health issues.

Allowing free 24/7 access to an attached and secure run allows a rabbit out to eat grass before owners get up in the morning, at dawn, when dew on it provides water, helping dilute the often very sediment-rich urine of rabbits. Inadequate water intake is a contributory factor in urine “sludging”, urine scald and, subsequently, fly strike.

Neutering is an important preventive health care measure for female rabbits, with a high prevalence of uterine pathology (Künzel et al, 2015) and moderately high mammary pathology rates. In males, the risks of testicular and prostatic cancers are lower, but neutering both sexes allows them to be bonded in companionable pairs or small groups – felt to be one of the highest welfare concerns in rabbits (Rooney et al, 2014).

It also prevents the almost inevitable fighting between intact males, or mating between unneutered males and females, which contributes to the huge number of unwanted, abandoned rabbits (Rabbit Welfare Association and Fund figures of approximately 67,000; Todd, 2015).

Neutering is technically easier to perform in females before six months of age (for example, at about four to five months of age) as the blood supply to the uterus is smaller and simpler, the uterus is not as well developed and its associated fat deposits are smaller.

This all makes the surgery quicker, less traumatic and less likely to lead to postoperative complications such as pain, GI stasis and adhesions (Richardson and Flecknell, 2006).

Parasite control – a mainstay of preventive health treatments in feline and canine practice – are not so vital in rabbits and are rather different in this species. Regular flea and worm control is of very little value, with rabbits not commonly carrying either.

The most common ectoparasite issues are mites – typically Cheyletiella – and fly strike. These are both, to a huge degree, related to the health of the host, rather than simply the presence of parasites. Unlike in dogs and cats, healthy rabbits that are able to move and groom fully rarely get either, and when they do clinical investigation into the cause is warranted.

Intestinal worms are also fairly uncommon in rabbits, and those that cause pathology are even less common. Passalurus ambiguus, the common rabbit pinworm, is found mainly in the hindgut, while Graphidium strigosum, the stomach worm, may cause problems in high numbers. Of course, tapeworms may be found in rabbits as their intermediate host, in the tissues rather than the GI tract. Helminths are, therefore, rarely identified as a clinical problem such that regular preventive treatment is not advised.

More of an issue are coccidia – protozoal parasites of the genus Eimeria – inhabiting various portions of the GI tract, which may cause GI signs dependent on exact site, but typically abdominal pain, diarrhoea (with or without blood or mucus present) and, most commonly, weight loss or poor weight gain in juveniles.

Commonly thought to be a problem only in juvenile‑farmed rabbits, it is not uncommon in younger rabbits that may have been reared or have lived in conditions of poor hygiene. The life cycle is direct, so numbers can build up rapidly, but as the oocysts require two to three days to sporulate and become infective, frequent cleaning of the environment is preventive and treatment with a potentiated sulphonamide is curative.

Another organism – a microsporidian parasite, Encephalitozoon cuniculi – is more closely related to fungi than protozoa, and can be a cause of severe disease. Shed as spores in the urine, from its primary site in the kidney, it is inhaled or ingested and spreads through the body, settling in ocular lens and renal parenchyma. Here, it can cause a range of neurological issues and accelerate the destruction of renal tissue, respectively.

Testing is problematic, as serology testing too soon after infection can provide false negatives due to lack of seroconversion, serological tests can give persistently high titres even after treatment and PCR testing depends on the organism being shed at the time of testing, making false negatives common (Keeble, 2011).

Truly preventive health care involves testing all existing rabbits using a combination of tests, and testing new arrivals to maintain a “clean” collection, in addition to treating any positives or blanket treatment of all existing rabbits – and new rabbits during an isolation period – for a minimum of 28 days to attempt elimination of the organism before it causes disease.